Keynote: CAMS Then and Now and the Path Forward 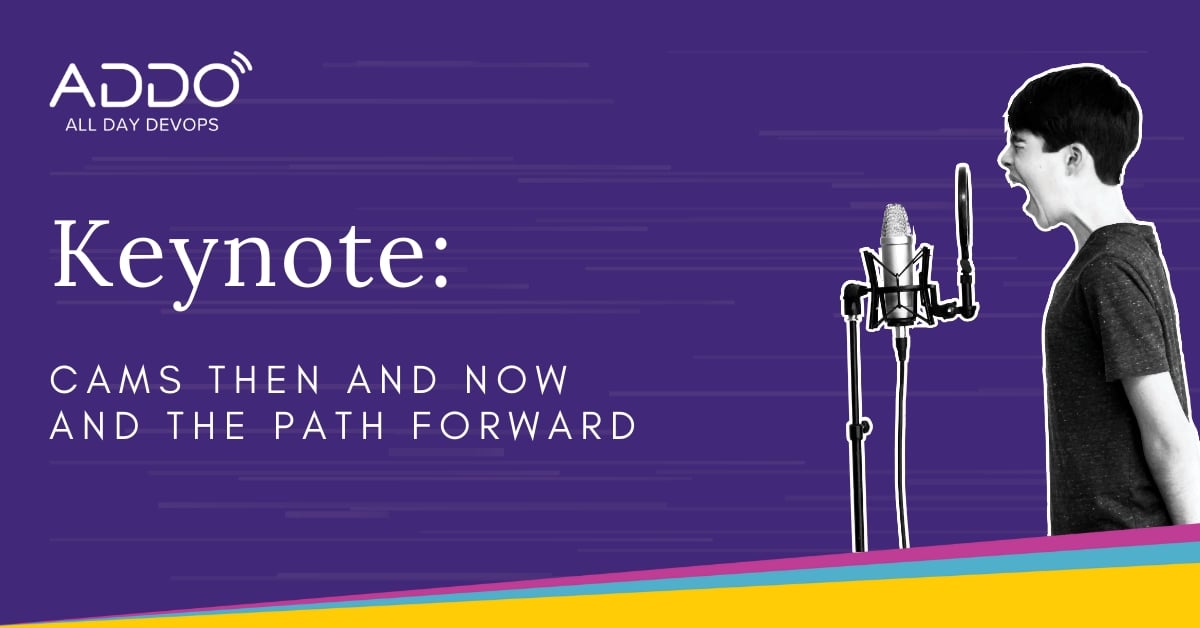 Originally a professional musician, Thomas Krag decided to leave the music industry and transition into Systems Engineering more than a decade ago. Through VikingOps, a DevOps consultancy company, he helps anything from large enterprises to startups understand the value of topics like Cloud Native, DevOps and apply these ways of working to their company.

Thomas was at this year's All Day DevOps (ADDO), the world's largest DevOps conference. The 24-hour event was live-streamed on October 28, 2021, reaching nearly 20,000 DevOps professionals from around the world. They gathered for free, hands-on discussions and education from 180+ speakers, along with peer-to-peer insights and networking with professionals worldwide.

His talk was about some of DevOps foundational concepts, referred to as CAMS: Culture, Automation, Measurement, and Sharing. CAMS has always been an integral part of DevOps. But the concept has evolved in the ten-plus years that DevOps has been around. Fittingly, Karg provides us with a bit of a historical view of how CAMS was understood by DevOps practitioners back then and then discusses how it's understood and applied today. He then turns to the future and shares his vision of the direction DevOps is taking moving forward.

CAMS, in the beginning…

Karg started his presentation with a brief history of CAMS. He attributes CAMS as being the brainchild of John Willis and Damon Edwards - two DevOps veterans. They defined the four constitutive concepts of CAMS as follows:

Culture was defined as a group of people aligned around the same goals; a group that is intent on going in the same direction. In essence, it was described as a shared mission.

Automation, in the early days, was about all of the new tools that were starting to become available at the time - mainly configuration managers.

Much like automation, in the beginning, measurement focused on newly available tools. These were rudimentary measurement applications compared to what is available today (such as Prometheus), but nonetheless helpful.

And finally, sharing was understood as feedback loops: creating a culture of openness and sharing, where each team member can bounce information off any other team member. That enables constant learning and moves the entire organization forward.

Where are we now?

Karg then tells us that CAMS is just as relevant today as it was back then. Simply, our understanding and application of its principles have evolved.

Specifically, within a DevOps framework today, we see culture as what creates a shared understanding between developers and operations staff, who share the responsibilities for everything the organization is building. Culture encompasses your entire organization.

Within a DevOps framework, you don't want to automate just for automation's sake. You need to look at your entire system and automate the right things. That's why culture is so vital to CAMS: culture informs all of your other structural decisions.

Automation has come a long way since DevOps initially took off. We now have things like infrastructure as code. We've moved away from exclusively using Bash, Ruby, or Python in favor of a more eclectic view of automation. We can use various tools and multiple libraries. For example, If you need to spin up a server today, all you need to do is perform a Git pull request; that's modern automation.

While the tools used for measurement have considerably evolved in the last ten years, so has our understanding of measurement within DevOps. While we still use many tools for time and progress management, and key metrics are still critical, the focus has somewhat shifted toward feedback and getting more of it more often. That means customer effort scores. It also means interviewing your users to measure your organization's efficiency. Measurement today is about measuring your infrastructure - your entire organization.

While the sharing mantra of CAMS' early days still applies today, Karg tells us that we've come up with new ways of sharing information.

You want to get your teams to make videos, give presentations, etc. The idea is to create a culture that fosters information sharing, and one that makes sharing second nature. And make these videos and presentations accessible to all members of the organization. Another way to promote sharing within an organization is to set up open spaces within the office environment to avoid barriers to sharing. It encourages collaboration and creates learning environments within your organization.

Sharing is critical to every aspect of DevOps. As Karg states, "If nobody had shared their desire to find new ways to collaborate, DevOps would never have happened."

Karg ends his talk by sharing his insights into where he believes CAMS and DevOps are headed in the future. He tells us that CAMS is here to stay and will continue to grow as more and more organizations understand its value. He also predicts that DevSecOps will be the next big focus within DevOps. But for all of the details, I recommend your tune-in to Karg's talk - it's enlightening.

All Day DevOps (ADDO) is a global community of over 75,000 DevOps practitioners and thought leaders offering free learning and information exchanges. The 2021 event featured the best and brightest of the global industry, featuring six tracks, including CI/CD Continuous Everything, Cultural Transformation, DevSecOps, Government, Modern Infrastructure, and Site Reliability Engineering.

Missed ADDO live? Sign up to watch the on-demand video of Thomas Karg discussing the past, present, and future of CAMS. View the ADDO speaker lineup to see what other engaging speakers joined us across a variety of industries.